For detailed Indian weather conditions, consult the Indian Meteorological Department. There are detailed predictions for all Indian states available from the MET department. Weatherbase has annual high, low and average temperatures and rainfall (precipitation) for many Indian cities.

India has a large number of climatic regions, tropical climate in the south to temperate and alpine in the north Himalayan regions. The elevated Himalayan regions receive snowfall in the winter months. Himalayas and the Thar Desert substantially influence the Indian climate. The Himalayas block the cold winds from Central Asia. This keeps the  Indian subcontinent warmer than places with similar latitudes. Thar Desert attracts the south west monsoons during the June to October post summer months,  providing most of the rainfall in India.

Summer: March to June are the Summer months in most parts of India. North Western India has April to July as the summer months. May is the hottest month in the North while West is the hottest in April. Average temperatures in India during Summer are around 32 to 40 °C  ( 90 to 104 °F )

Rainy Season : Also called the South West Summer monsoons, the rains last from June to September. South India receives more rainfall than the North. India has some of the world’s wettest places. This is typically a low tourist season, so for the “I hate touristy places” traveler, this is a good time to chill out in India. Kerala  promotes Ayurveda and Wellness spas during the monsoons too.

Post Monsoon season is the period from October to December. October and November have clear skies. It is a great time to trek the Himalayas. The state of Tamil Nadu receives maximum rainfall during this period, from the North East monsoons.

Winter season lasts from December to February end / early March. December and January are the coldest months where average temperatures in the North West are 10 to 15 °C (50 to 59 °F) while the South East part of the country has a maximum of  20 to 25 °C (68 to 77 °F) 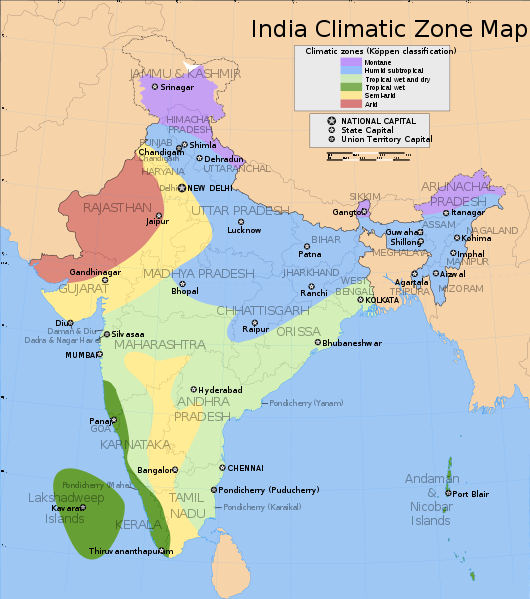